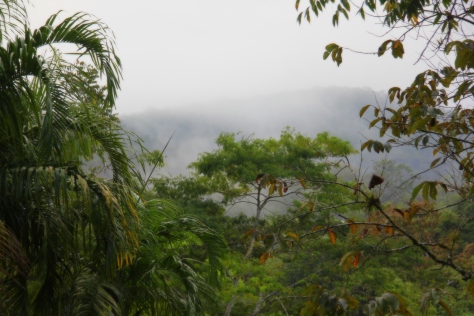 Tropical rainforests have been called “The lungs of the world.” They also provide the last remnants of habitat for some of our rarest and most unusual animals. Thousands of plants in the rain forest yield pharmaceuticals and cures. Seventy percent of the plants are known to be useful in the treatment of cancer.

When I was in Belize in February 2012, I stayed at Chaa Creek, an eco-lodge located in the Maya Forest along the Macal River. The Lodge at Chaa Creek has won many international awards for sustainable tourism. While there, I walked the Rainforest Medicine Trail and was witness to the work done by Don Elijio Panti, a traditional healer who was regarded as the last Maya master healer of Belize.  His ancient herbal remedies attracted the attention of modern medical scientists around the world. He contributed over 500 plants to the National Cancer Institute for anti-cancer and AIDS testing.  He died at the age of 103 after passing along his knowledge to his apprentice Dr. Rosita Arvigo who painstakingly documented every plant remedy he discovered. The Rainforest Medicine Trail was established by Dr. Arvigo, and she dedicated it to the honor of Don Elijio. Chaa Creek now manages the trail which showcases the wealth of the rainforest and serves as an educational tool featuring the edible and medicinal plants of Belize.

When I returned to the states I purchased Dr. Arvigo’s book titled SASTUN. I was enthralled with the narrative which chronicles her apprenticeship under Don Elijio and the desire that drove her to document his knowledge for posterity. All I could think about when reading it was the lack of attention that Western Medicine pays to traditional healing methods which have survived hundreds and thousands of years and the stupidity of our supposedly advanced civilization which unabashedly destroys the earth’s gifts of healing.

Please join the fight to save the earth’s rainforests.  Donations can be made to any of these organizations. Consider making a donation in honor of a friend or loved one during the upcoming holiday season.